The Benefits of Light

Although heliotherapy traditionally refers to treatments that use natural sunlight, the term is also applied to artificial sources of ultraviolet, visible or infrared light radiation.

Since  the 18th century when a French doctor noticed that the wounds of his patients healed faster when the patient was exposed to the sun. sometimes called phototherapy, it became a key part of certain treatment regimes for tuberculosis, notably tuberculosis of the bones, joints and skin, as prolonged exposure to sunlight can kill the bacteria which cause the disease. Infected children who were sent out to special homes and hospital retreats were encouraged to spend as much time outdoors as possible. These children had often come from dark and dingy city slums and exposing their skin to sunshine raised their levels of vitamin D, which also helped them fight the bacteria.

A century later, Danish physician, Niels Finsen, concluded similar results, and began treating diseases using sunlight. As sunlight is not available at all times, artificial alternatives were developed that could mimic the Sun’s beneficial effects. The Finsen lamp, is perhaps the best-known example. An ultraviolet lamp, it allowed flexible treatment in all seasons and its rays could be concentrated onto the most affected parts of a patient’s body. Its greatest success was in the treatment of lupus – tuberculosis of the skin Because of its success, Finsen won a Nobel Prize for his sunlight treatment for tuberculosis in 1903.

Before antibiotics, like penicillin were discovered in 1928, sunlight was used as a medicine for a number of diseases. This sunlight therapy was called heliotherapy (helios means sun in Greek) was primarily used in Europe. It was the most effective way to cure infections between the end of the 19th century to the mid 20th century. Doctor Auguste Rollier was the most famous and successful heliotherapist of his time. He owned 36 clinics in the Swiss Alps. His clinics were high in the mountains where UV -B radiation is stronger than at lower sea level. Rollier’s sunlight therapy combined with a vitamin rich diet cured patients from diseases such as rheumatoid arthritis , asthma and tuberculosis.  In 1954, around the beginning of the pharmaceutical industry boom, Rollier died. By 1960 heliotherapy faded, replaced by the miracle drugs, “antibiotics “. Twenty years later everyone was told to stay out of the sun because sunlight would cause skin cancer. The therapeutic effects of sunlight come from UV rays.

With visible light, the sun radiates three types of ultraviolet rays, UV – A, UV- B and UV- C. UV-C is filtered by the atmosphere. UV -A is a weaker radiation, not retained by glass and sunglasses. UV-B radiation is the strongest and can be stopped by sunglasses, glass and sunscreen. Even when sitting in the shade, we absorb UV-B, which can provide great health benefits. A deficiency however, can cause muscle weakness, muscle cramps and osteoporosis.

In 2011, a study by Penckofer and Kouba was published concerning the relationship between vitamin D3 and depression.

Vitamin D is a steroid hormone that influences every cell in the body, and is easily one of nature’s best cancer fighters.  Vitamin D converts to calcitriol in your bloodstream, which is the hormonal version of vitamin D.  Organs then use it to repair damage, including damage from cancer cells and tumors. A study by Dr. William Grant, found that about 30 percent of cancer deaths, which amount to 2 million worldwide and 200,000 in the United States, could be prevented each year with higher levels of vitamin D. When using sunlight to fight cancer, the dosage is important. Getting the proper amount of sunlight to optimize your vitamin D levels is key. Your exact time will vary depending on your skin color, time of day, season, clouds, altitude and age.  It is still important to never get burned, while still spending as much time as you can in the sun during the peak hours. Be aware that using sunscreen will block your body’s ability to produce vitamin D.

So enjoy the sunshine, often and in moderation!

Benefits of Sunlight and UV Light

Tanning Beds Decrease Ten Times More Cancers than they Cause – Dr. Mercola
“Another important factor to keep in mind is that vitamin D, ideally from sun exposure, may decrease your risk of many other cancers and chronic diseases”

The Link Between Breast Cancer and Vitamin D – Vitamin Council

TWO LOCATIONS TO SERVE YOU 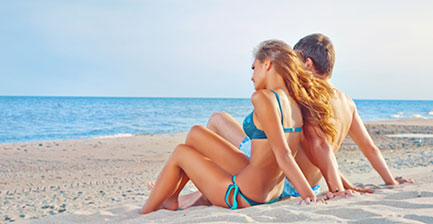